Believe it or not we really do work around here.

Tuesday we saw quite a foot race between Jon Galloway and The Nicky Cortez. Nick bet Jon he could beat him while wearing flip flops.

Of course, the buildup and the fallout has turned into quite a spectacle. Apparently, there’s going to be a follow-up. So I’ll keep you posted.

Nicky had a Donut after the race. 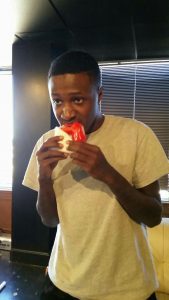 Today’s the day we’ve been waiting and planning for. If all goes as planned we hope to be shooting a series of spots for this client. Once it’s done we’ll be sure to post it up for you guys to see.

In the meantime I’d like to give our friend Rob Izatt a very big thanks for being patient with us. When you get the chance look into Rift Fit.

So, James got in a wreck today. 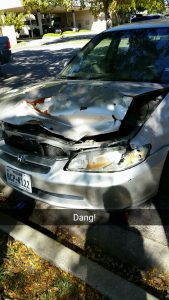 Not really, we used his car for the shoot.

Also notice the quality of video folks. I have an iphone, just because I’ve always had one. This video was shot using James’ Samsung and while they might burn your house down while you’re asleep inside, I have to admit, it’s a much better camera.

There’s this song that I’ve literally been listening to all day, everyday. What’s the song you ask?  It’s the newest song by Bruno Mars “24k.”  This song will have you out of you chair dancing no matter who you are.  I have no clue who produces his music but I’d like to think they are James Brown reincarnated, so FUNKY!  I must warn must you, excessive play of the song may result in zero work getting done.

I’ve occasionally been playing “Koala,”  by Oliver Heldens.  I’m a big fan of EDM tracks that feature vocals.  The beat and the vocals make this song ideal for the ride home.

And lets not forget,

What to wear for Halloween…

“Cameron, what are you going to do for a costume?” asks David.

“Probably going to the costume shop and getting the cheapest thing I can find.” replies Cameroni.

I’ll make sure to get you guys a picture. That’s it!! Get back to work!!