I never would have thought I’d be the type that would wake up at six in the morning but I was wrong. It’s starting to happen and I don’t really like it. I wonder what’s next.

We always like to share with you some of the projects we’ve knocked out or are working on. There are quite a few things in the works so I’m limited with what I can share but
I will tell you that one of our coolest new clients is Todd Bentley with Optimum Rope Access Solutions. He’s a great guy with a lot of ideas. 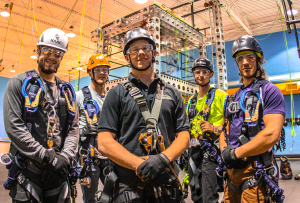 We are currently in search for a new team member and we have a few candidates we’re in the process of talking to so we hope to have that situation figured out very soon. Those two guys have

been very patient so a big thank you to them.

Not too much meat this time, but as always thanks for reading. Time to get back to work.

There’s a new driver in town.

Most people by now have heard about Uber and know how it works. It’s like a nationwide cab company that allows it’s employees to work their own hours as long as Uber gets their slice of the pie. In the past few years cab companies in major cities have been struggling because of Uber and if you go somewhere like New York then you’ll find parking lots full of yellow cabs that were in business just half a decade ago. As for Amarillo I have only ridden in a cab once and an Uber once so my experience is split. Now we have a new player in town, Lyft. This is very similar to Uber and is set up as a ride sharing service. They have recently opened up in 54 cities across the country. Lyft has a huge potential to be the next Uber because Uber is currently at a loss of 3 billion. To giant companies like Amazon, being at a billion dollar loss is no big deal, if you can bounce back from it. Many believe Uber’s business dealings have been unethical and they have took advantage of their workforce. After taxes and giving Uber what the driver signs up for the cost of driving for them just isn’t worth the time put into driving strangers around. Plus the vehicle your using as a taxi has to be at least 10 years old so that’s another huge expense. Ubers only way get out of the rut is to use self automated cars. Ford is already planning to release the first self driving car by 2021. That would eliminate its workforce but also eliminate the possibility of bad publicity that Uber has been getting recently. Unless the whole plot from 2004’s iRobot plays out, then that would be bad publicity.